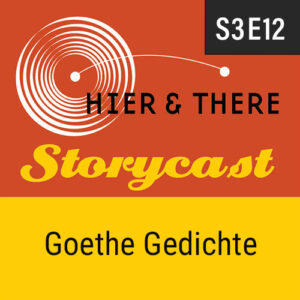 If you’d like to read along, you can find the text to the story by clicking this link.

In this Storycast, we’re taking you back to the 18th century with three poems by Goethe—Erlkönig, Der Zauberlehrling and Der Abschied.

Goethe was born on August 28, 1749 and in true polymath fashion, he is known as a poet, playwright, novelist, theater director, a critic of arts, and a scientist. Goethe, a lawyer by education, achieved noble status at the ripe age of 25, after writing The Sorrows of the Young Werther. As a scientist, he wrote the Metamorphosis of Plants in 1788 and just three years later, he became the managing director of the theater in Weimar.

Among his famous works are Faust, Wilhelm Meister’s Apprenticeship, Prometheus, and several others. What’s as surprising as his seemingly limitless talents, is that he had time to get married to Christiane Vulpius in 1806. Goethe was the father of five children, although four died at a young age.

Truthfully, this short summary is a grave injustice to a genius who died in March 1832 and left literary works for us to cherish for what likely will be eternity.

Goethe’s poems leave us with numerous things to ponder and discuss. If you have a German group to talk with, your interpretation of the poems always creates a fantastic conversation.

Audience Participation: If you have ideas for stories to include in our Storycast series, please connect with us at podcast@gaimn.org.

Enjoy the GAI Podcast on your favorite platform:

We love to receive feedback and topic suggestions from our listeners! Connect with us by email at podcast@gai-mn.org.